The Causes and Cures for Sulfur Deficiency in Plants 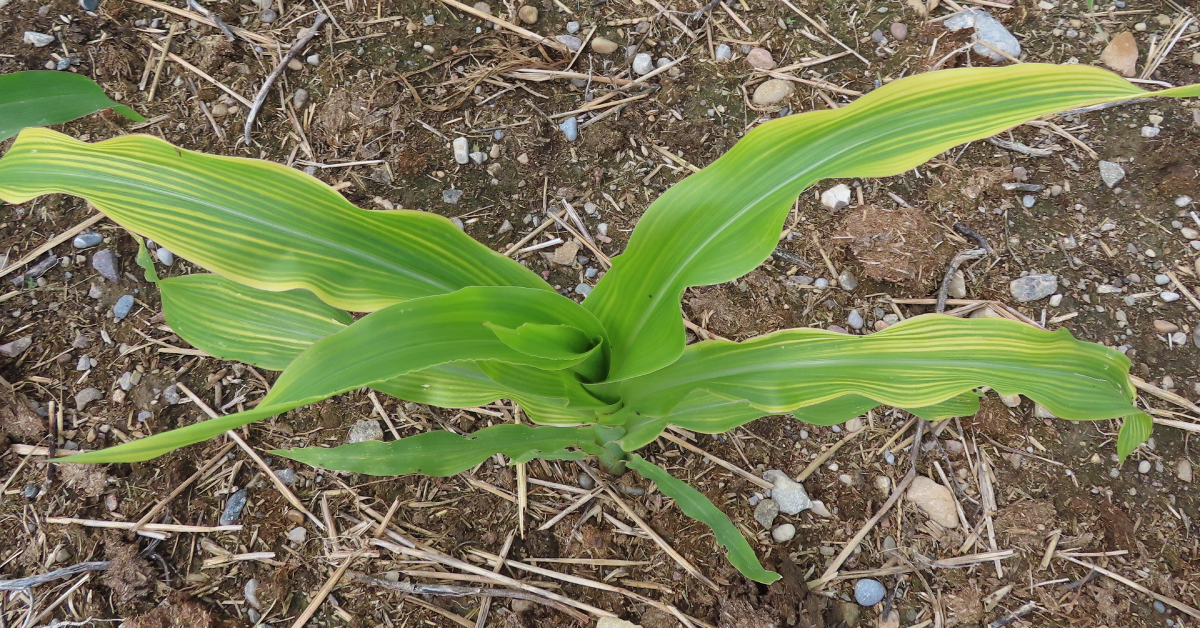 With yield goals going up year-over-year and grain prices on the rise again, getting the most value out of your crop nutrition program has never been more important.

After N-P-K, sulfur is often considered the fourth major plant nutrient since it is essential for the healthy growth and development of all crop species. With decreasing amounts of plant-available sulfur readily present in the environment and ever-increasing yield goals, farmers need to pay more attention to the role sulfur plays in their crop nutrition programs. Fortunately, sulfur is a lower-cost nutrient that is easy to add to any nutrition program to improve the effectiveness of higher-cost nutrients.

Let’s dive into the whys and hows that make sulfur so essential, then look at two products that provide a lot of bang for the buck.

Sulfur is one of the 17 essential nutrients for healthy plant development.

Along with calcium and magnesium, sulfur is a “secondary nutrient” and is a key component in two amino acids used in protein production. It is essential for chlorophyll formation (which is partly why sulfur-deficient plants turn yellow) and in oil synthesis.

Sulfur not only plays a key role in plant growth but is also critical to the efficiency of other essential nutrients.

A crop’s sulfur requirements are closely associated with its nitrogen demand due to sulfur’s role in protein and chlorophyll building, and in converting nitrates (NO3) into amino acids.

On average, crops generally use 1 parts sulfur to 10–14 parts nitrogen. However, some crops rely more heavily on sulfur for their physiological processes and as a result, they are more responsive to supplemental sulfur fertilization. Alfalfa, broccoli, cabbage, canola, cauliflower, celery, corn, sugarbeets, sugarcane, table beets, turnips and watermelon are a few such crops. Unsurprisingly given the direct S:N demand correlation, many of these crops are also high users of nitrogen.

Sulfur in the Soil

Plants use the sulfate (SO4) form of sulfur; however, most sulfur in the soil is unavailable to plants as part of soil organic matter because it is in a form they cannot absorb. Fortunately, sulfur is transformed into its sulfate form through the microbial conversion of organic sulfur (sulfur plus carbon & hydrogen), and through bacterial oxidation of organic sulfur, hydrogen sulfide (H2S) or elemental sulfur (S).

Sulfur can be effective at removing (leaching) sodium and other excess cations from the soil, which often has an acidifying effect that can increase the availability of other plant-essential nutrients—especially in calcareous soils or those with a high pH.

In the past, crops got most of their sulfur from the atmosphere in the form of SO2 gas. However, changing fuel regulations and pollution controls succeeded in improving air quality for people in part by removing sulfur compounds from the air. These factors, combined with the ever-increasing scale and sophistication of agriculture have significantly impacted sulfur availability for today’s crops.

There are many different application methods and products available to meet the sulfur needs of today’s crops.

For cool-season crops or crops like corn that are planted in cooler environmental conditions, sulfur mineralization and microbial sulfur conversion are likely to be reduced, leading to lower levels of plant-available sulfur in the soil. Therefore, early sulfur applications can be beneficial to young seedlings’ development.

Applying sulfur with the planter is an excellent placement method that gets the available form of the nutrient next to the root system to maximize the benefit to the new plant. This placement can also be more environmentally friendly because it is placed near the zone of uptake and will likely get used by the young plant before it has a chance to leach from the soil system.

When choosing a sulfur additive or fertilizer to apply when you plant, look for one that combines sulfur and nitrogen with other micronutrients. AgroLiquid’s eNhance is a sulfur-based additive designed to improve nitrogen usability and is an excellent seed-safe source of crop-available sulfur.

eNhance can be safely applied in-furrow with common rates of 1–2 qt per acre for many crops and provides 3–6 pounds of equivalent sulfur at these rates. In studies, eNhance was shown to increase corn yield by over 6 bu/A when applied in-furrow at the rate of 2 qt/A.

Figure 1 shows data from AgroLiquid's eNhance and accesS sulfur fertilizers in multi-year studies. At least 7 years of data and 12 experiments were used to compare a crop nutrition program with planter-applied sulfur to a normal planter program without sulfur. 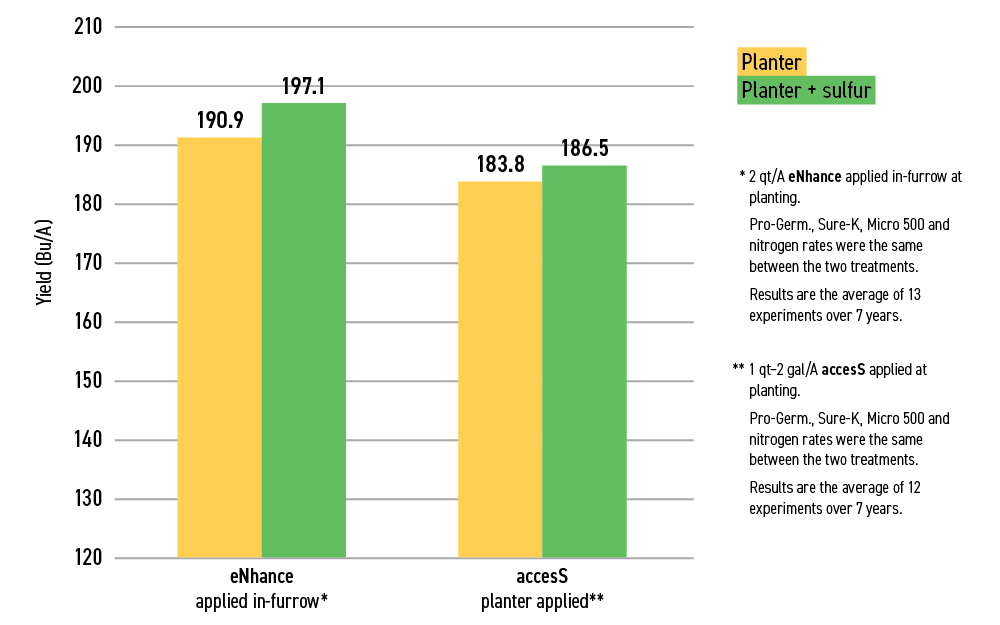 Applying nitrogen while planting gives a good opportunity to add more sulfur to the nutrient program to get the most out of your fertilizer application.

During planting, nitrogen fertilizer is often placed 2x2 or on one or both sides of the row—the latter of which is becoming more common. These placement areas that are next to but away from the seed are still beneficial to the young root system.

accesS is a high-efficiency liquid sulfur fertilizer that mixes well with liquid nitrogen fertilizers to apply—away from the seed—in the above application pattern. A typical planter application may be 1–2 gallons per acre, which provides 5–10 pounds of sulfur at this application rate.

Regardless of what product you use or when you apply, paying attention to the levels of sulfur in your soil and crop nutrition program will yield dividends come harvest time. Contact your local IFA Crop Advisor.

Written by Emily Newhouse and originally published in the IFA Cooperator magazine (vol. 87, no. 3) Fall 2021.

Emily grew up in the north woods of Wisconsin before earning her Bachelor of Science Degree in Chemistry & Marketing from DePaul University in Chicago, IL. After graduating, she found her niche in the chemical-products division of a $12B+ global industrial company where she led branding and new market exploration before moving into international marketing management & product innovation. In 2017, Emily received a patent for her leading work in developing wear-indicating metalworking lubricants. After moving to Utah with her husband, Emily discovered IFA in the spring of 2020 when a friend recommended IFA’s 4Step lawn fertilizer program and joined IFA’s Marketing & Communication Team shortly afterward. When not pouring over a database or fussing over her lawn, Emily loves exploring Utah’s trails, mountains and National Parks with her husband and their young daughter.