Home / Helping to Grow / Time to Split! How to Split a Beehive

Time to Split! How to Split a Beehive 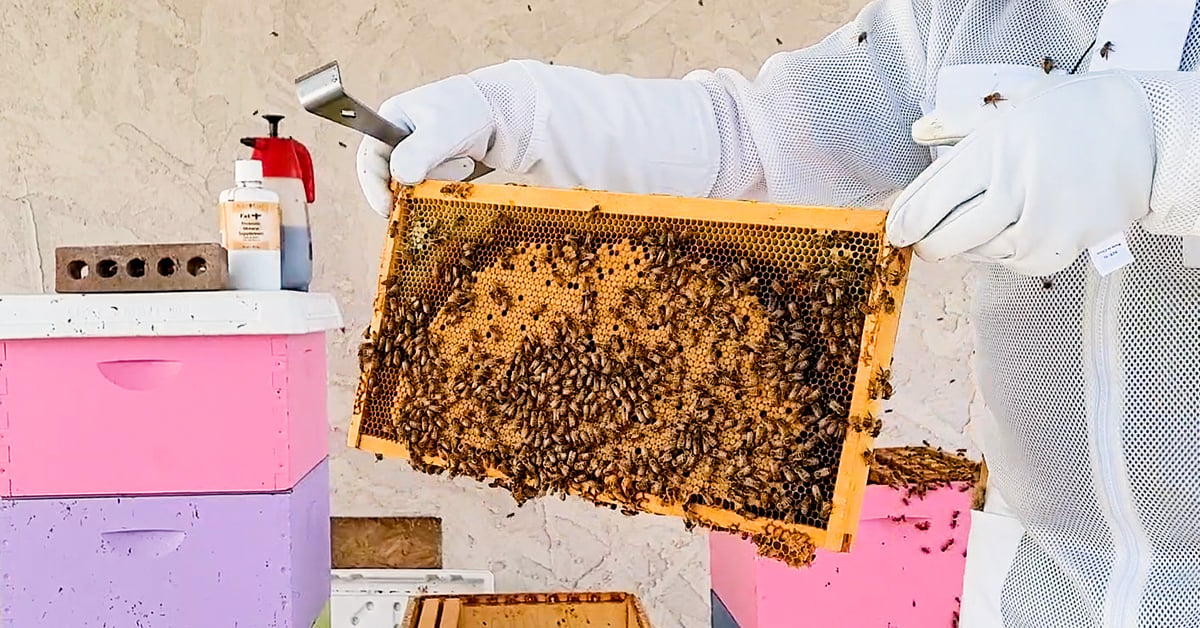 The vibrant colors and sweet tang of emerging plant life are tell-tale signs of the approaching summer. As the days grow longer and temperatures rise, you can hear your apiary “buzzing” back to life. This is a critical time for your bee colonies as they recover from overwintering and begin preparations for the next cold season.

With pollen to be collected, honey to be stored and brood to be reared, you are sure to have some very busy bees. To accomplish these critical tasks, the queen will increase her egg laying to increase the hive’s numbers. While this explosion in population is vital to hive health and success, the growth presents both colonies and beekeepers with challenges and new opportunities. If your bees seem to be swarming it may be time to split the hive. But first, what swarming signs should you be looking for?

Why Do Bees Swarm?

“Swarming” occurs when the hive undergoes extreme population growth heading into the summer months. As a colony expands, the result can be overcrowding and an increased difficulty regulating and maintaining an ideal temperature. When this happens, the bees become restless and the queen may decide to take a portion of the colony to find a new home.

If your bees are preparing to swarm, you run the risk of losing productive bees as well as the genetics of a good queen. Recognizing the precursor signs of swarming is the first step to preventing this potential hive and production loss. 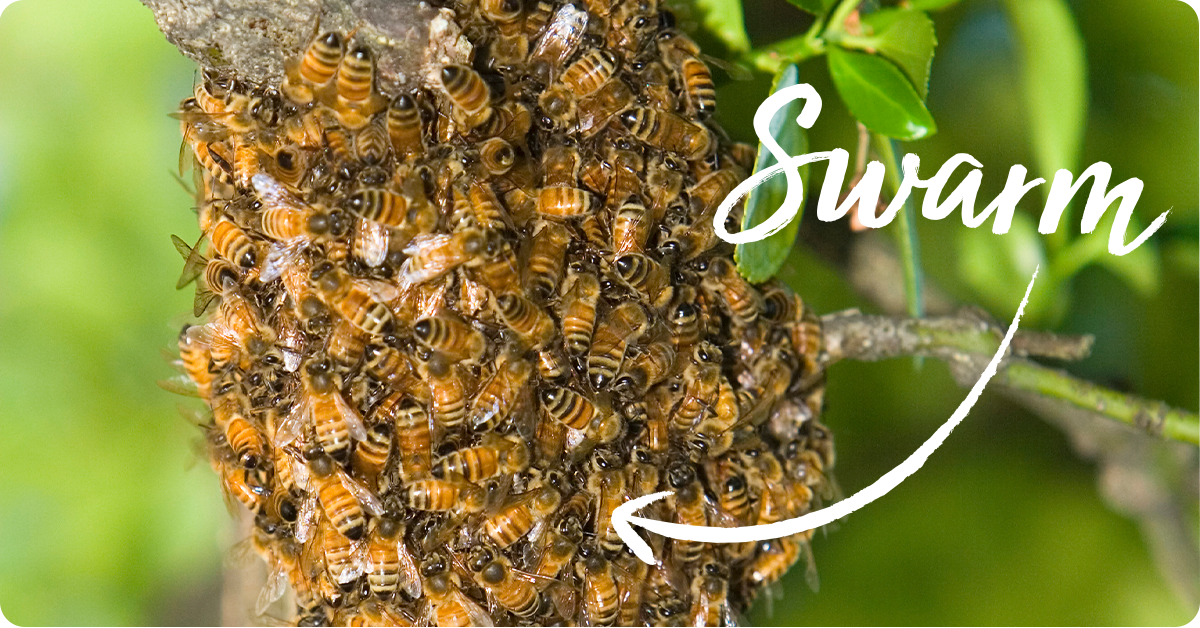 Swarming is the bees’ way of combating population and spacing problems, so naturally, one of the first indicators of a potential swarm is crowding on the hive frames. Not every hive with full frames is preparing to swarm, but it is often a good idea to separate an obviously strong hive before it gets the inclination to do so itself.

Cell formations in the hive are fairly common. There are a couple of reasons bees form cells, but the most common among them is a new queen bee is being introduced to the colony. If the current queen bee is aging or ill supersedure cells will be formed. If the colony is swarming and the queen is preparing to leave the colony swarm cells, also known as queen cells, are formed.

When the current queen prepares to leave the colony, a new queen will be needed to replace her. As a result, a number of queen cups may form on the base of brood frames with a developing queen inside. These cells often resemble the shell of a peanut growing out from the brood frame and are a strong indicator of a coming swarm.

Bearding occurs most often on hot days when bees gather outside of the hive in a large group or strand resembling a beard coming off of the hive. The bees will do this due to the lack of circulating air and increased heat from the number of bodies within the hive.

When bees begin forming this beard, pay close attention to the previous swarm indicators as the hive is getting too full for the space they have. 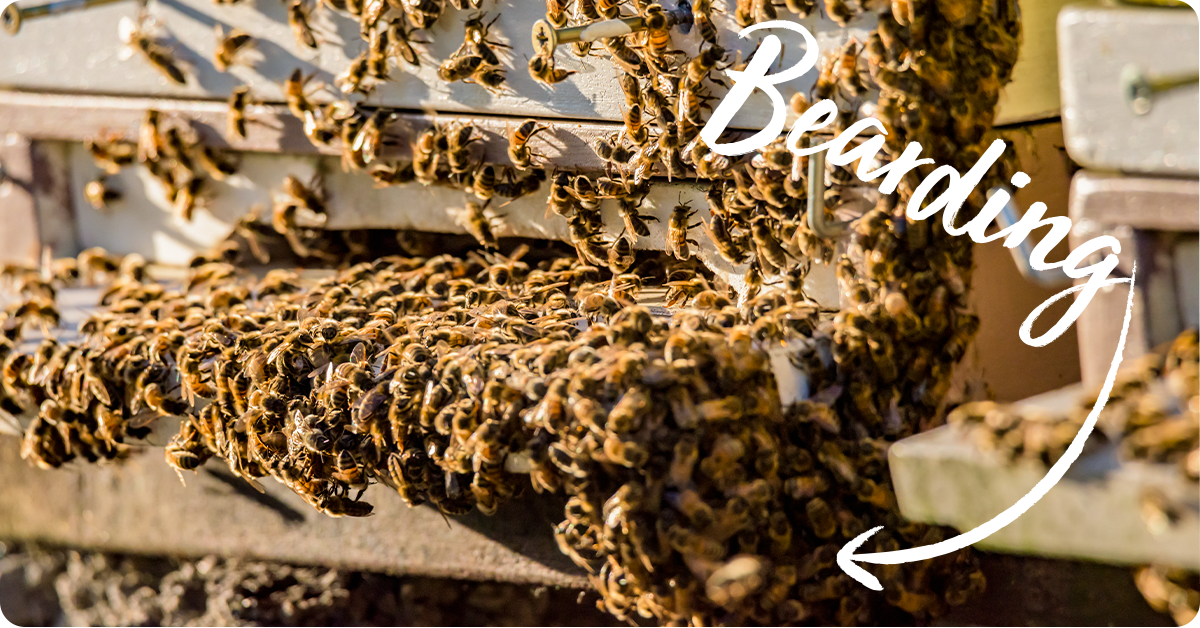 To Split or Not to Split?

Splitting is a great way to combat potential swarming losses and even grow your apiary. When deciding whether-to and/or how-to split, start by honestly evaluating your beekeeping goals, your current hive/apiary and your resources:

Are your bees showing signs of swarming?

Time is of the essence if your bees are already showing signs of swarming. Your hive is telling you it is stressed and ready to act. In this case, it is a good idea to split the hive, regardless of your beekeeping goals.
Even if you aren’t interested in expanding your apiary, splitting your hive now before it can swarm ensures your productive queen and hive will stay in your bee yard instead of finding a new home. 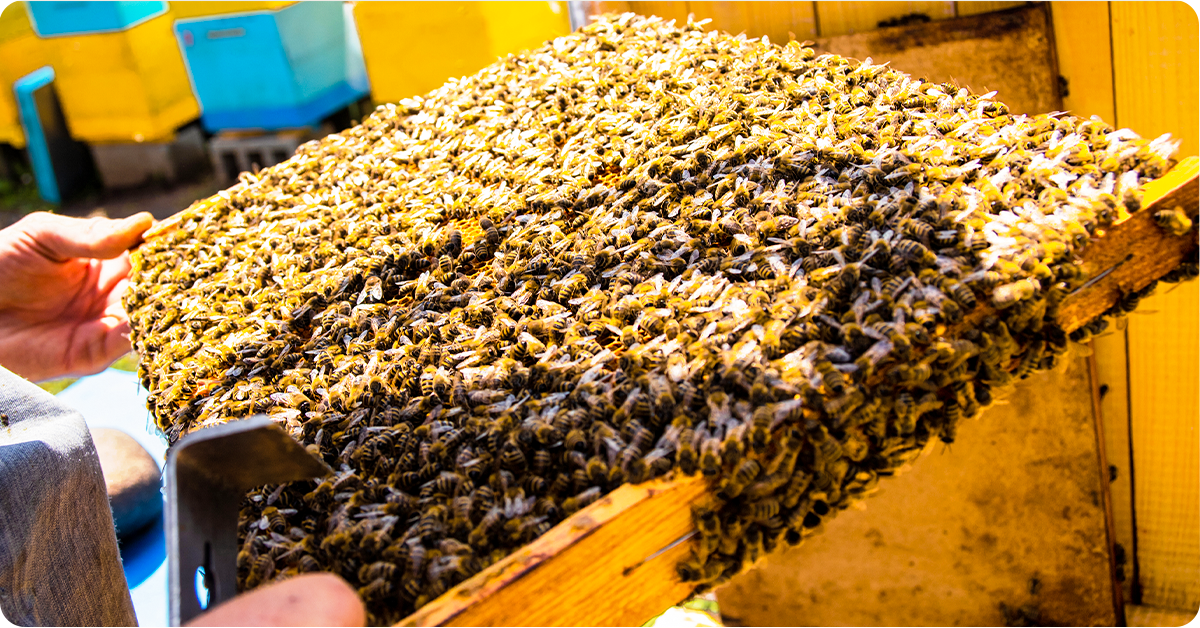 Is the hive strong enough to split?

If you’re trying to expand your apiary by splitting your hive, it is vital that the hives are strong enough to do so. A growing hive needs a strong queen and workforce to prepare for overwintering, so splitting a hive with a weak population, brood or honey/pollen store will increase the stress placed on the hive. Splitting a hive that is not ready to separate can result in not just one, but two failed hives.

Do you have the time, equipment and space?

Splitting your hives takes an investment on your part. The amount of time, access to equipment and availability of space should all play a role when deciding how and/or whether to split a hive.

To successfully split a hive, you need adequate bottom boards, brood boxes, honey boxes and frames, as well as space for the new hives in or around your bee yard where they will have access to the resources they need.

Also keep in mind, each type of split will take a different amount of time based on your bee population and decisions in relation to these.

Learn more about finding the right space for a new hive

How to Split the Hive

You’ve thought it through and decided to make the split, now it’s time to figure out how. There are several methods you can use; deciding which process is right for you depends completely on your beekeeping goals.

A walk-away split is one of the simplest ways to go about separating an overcrowded hive. To perform this split simply remove the top brood box from the beehive and place it on its own bottom board to create a new hive, then place a second box on each hive.

The current queen will be present in either the original or new hive and will be able to continue laying eggs and building up her colony while the other hive rears a new queen from available queen cells. This queenless hive will need to be left undisturbed for a full month after the split to ensure the new queen is able to complete her breeding flights and begin laying eggs.

If you find your hives producing excess queen cells, you can capitalize on this by separating the colony into several independent hives. Do this by incorporating equal amounts of honey, pollen and brood into each new hive, then introduce a few queen cells into these splits.

If possible, you should locate the current queen and place her in one of the new hives without any queen cells. Like with walk-away splits, the new hives should be left undisturbed while the new queen(s) develop.

An artificial swarm is a hive-splitting method that can be performed on a strong hive regardless of whether or not the hive has shown signs of swarming. To perform the split, you need to identify the queen then move her and a few frames of bees to a new hive, leaving the original hive without a queen. This will prompt the original, now queenless hive to rear the queen cells left.

Wait at least eight days after removing the original queen for the new queen cells to begin capping. Then place 2–3 of these capped queen cells into each new hive along with the appropriate amounts of honey, pollen and brood.

After placing the capped queen cells in their new hives, they should be left alone for one month to allow the queens to finish developing and complete their breeding flights.

If you notice your hive becoming crowded, or simply want to split a strong hive without waiting for queen cells to develop, you might consider simply ordering a new queen from your local supplier. It requires more monitoring and good timing to properly introduce a virgin queen, so success hinges on planning well in advance.

Once you’ve determined the hive is strong and have located the current queen, you need to ensure she stays in the hive by removing five frames of bees where she is not before ordering your new queen. Three days before the new queen arrives, remove three frames of brood and a couple frames of honey and place these in the new hive.

Once the new queen arrives, introduce her to the hive by placing her cage between the brood frames for three days and then release her into the hive using a candy plug or marshmallow.

Your apiary and beekeeping goals are unique to you. Your local IFA Country Store can help as you plan and prepare for making necessary or desired splits by connecting you with the essential tools.

From brood boxes, frames and bottom boards to handling equipment and even new queen bees, IFA Country Store has a wide selection of products to help.

Stop by today and let your local IFA team help as you plan and prepare for the potential swarm and splitting season.