Sowing the Seeds of Success on the Robert Nielson Ranch 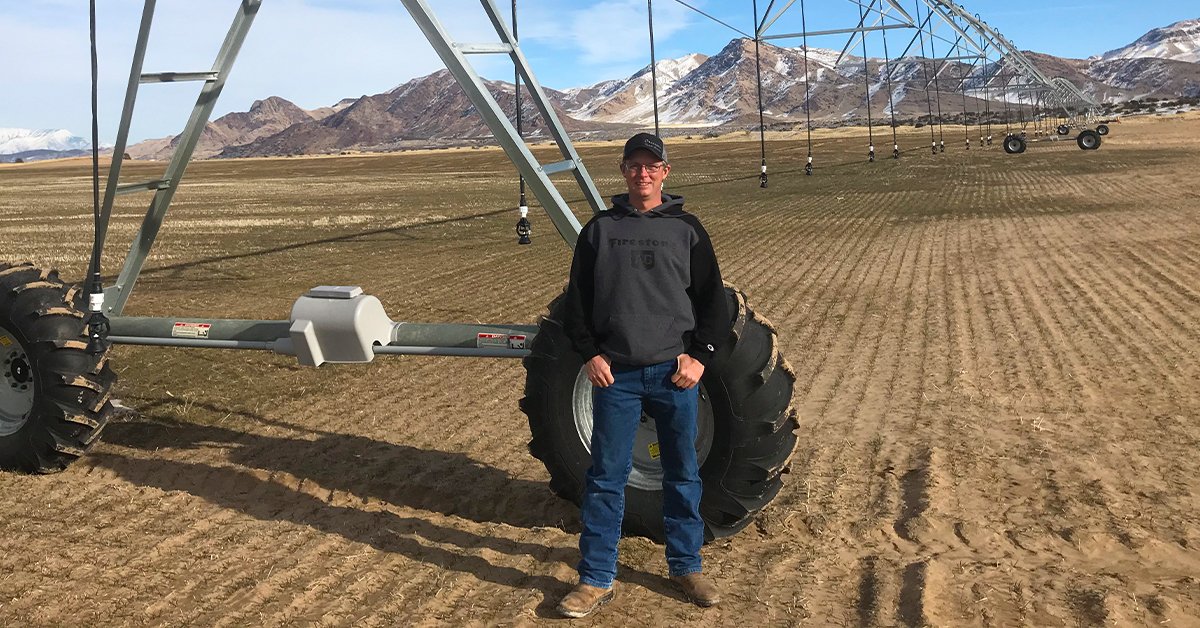 In the late 1800s when Lars Nielson homesteaded land around Lyndall, Utah, he never would have imagined that five generations later, his great-great-grandson, Chad Peterson, would be operating his part of the ranch with such great care and with the support of modern technology.

As a boy, Chad would help his grandfather run the ranch and knew from a young age that he wanted a life of farming and ranching. When Chad took over the ranch from his grandfather, Robert Nielson, it was 300 acres in size with 25 head of beef cattle. After a couple of years of college, and the farm beckoning him back home, Chad went to work at the lime plant south of Delta for 9 years while also working and improving the ranch in the evenings and on weekends.

Chad understood the necessity of water conservation and how it played an important role on his ranch and in his expansion plans. He went to work installing his first irrigation pivot, and once it was installed, he saw the potential of farming and was “all in” from then on. He left the lime plant and began full-time farming and ranching.

Today, after adding six more pivots, Chad produces hay and corn on 1,000 acres that he owns and leases. His beef cattle operation has grown to over 250 head that graze on his privately-owned land as well as state and federal grazing permits.

“My success has come from seeing what my neighbors do and asking them for advice. I owe my success to the people of this valley. If your neighbor is doing something, and is having success at it, don’t be afraid to ask them what they are doing. It makes me as happy to see my neighbors have bumper crops as well as myself.”

It’s evident that Chad has a good relationship with his neighboring farmers and ranchers. The majority of his hay and all of his corn is produced for local dairies around Delta. “We celebrate everyone’s success. There’s not a lot of places you can say that about, but this valley is unique and close-knit,” he says.

Chad says another key to his success is the relationship he has with his local IFA in Delta. Another pattern of following in his grandfather’s footsteps is the many years of membership they have had with the Co-op.

With almost all of his purchases coming through IFA, Chad has come to depend on the products and services they provide.

“Timing is everything,” says Chad. “IFA plays a huge part in my operation. They (IFA) understand timing. You can count on them to be on the field at the right time to spray or fertilize, which is sometimes in the middle of the night or on weekends, because the water is coming on. Our IFA crop consultant, Whit Sorensen, wants us to be successful just as much as we do ourselves. He is just as dedicated to our crops as we are.”

It’s evident that Chad gives much of the credit for his success to those around him and those who came before him to work the land. In honor of those, he has named his ranch the Robert Nielson Ranch, after his grandfather, with who he worked side by side for many years. “That’ll never change,” he said. “It will always be named after my grandpa.”

Chad was elected to the IFA board of directors in March 2018. He is currently serving a three-year term from District 7, which comprises Utah’s Millard and Juab Counties along with the majority of Nevada.