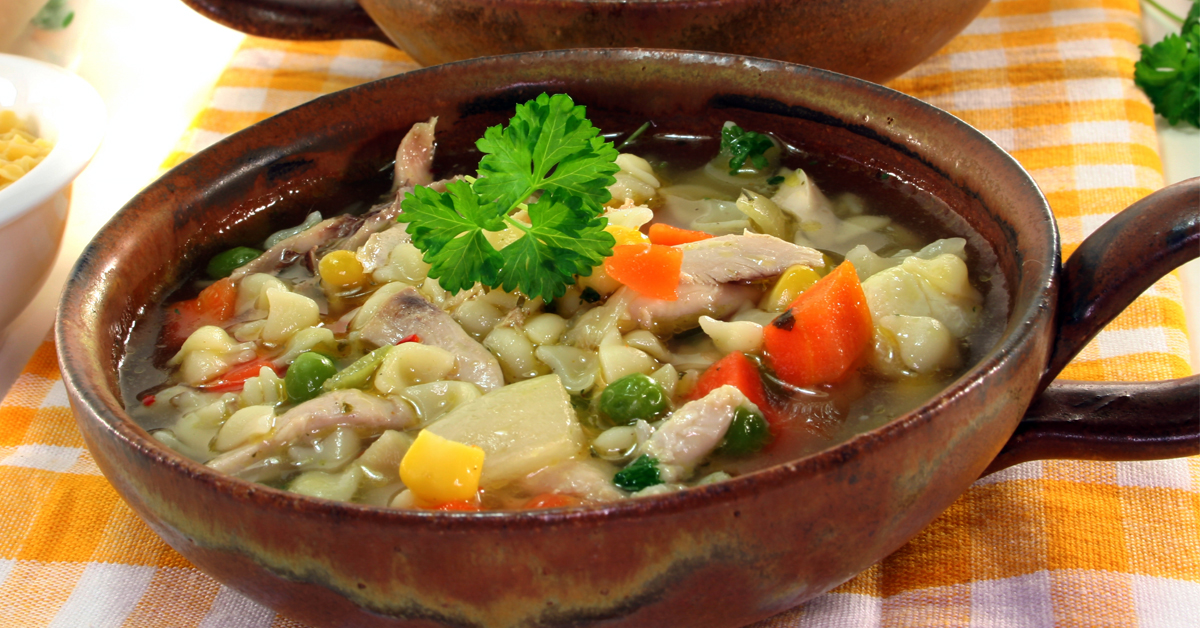 Boil chicken. Remove chicken and cube. Add raw vegetables and salt and pepper. While these are cooking, make the noodles with the flour, salt, eggs, and milk. Mix well with your hands. Roll out on a floured board until very thin. Cut with a pizza cutter or knife. When raw vegetables are tender, add corn. Bring to a boil and add noodles one at a time. Flour noodles will thicken soup a bit. I try to pat the flour off. If not enough noodles, make more.

The Christmas Chicken of 1932

It was November of 1932, and the Kendall children—Sarah, Emma, Thelma, and Edward—had just lost their mother due to an accident that occurred while working at the cannery in Ogden, Utah, leaving 18-year-old Sarah to care for her younger sisters and brother. Their father had passed away eight years earlier.

Now, all they had was each other along with a house, some cows, fruit that their mother had bottled in the fall, handsome flour and sugar that she had purchased shortly before her accident. Before her death, she was aware that the accidental insurance that she had counted on for her children wouldn’t pay out, but there was a $50 life insurance policy that would hopefully come to her children in the spring.

They knew that if they could just make it through the winter they’d be fine, because come spring they could plant a garden and begin finding work. Although they didn’t know it at the time, the world was in the middle of the Great Depression and people were dealing with their own problems and financial concerns.

Christmas was coming soon and they were not inclined to celebrate. However, Victor Fernelius had been cutting two Christmas trees and bringing one to their mother for years since their father’s passing. This year was no different, as he faithfully showed up with a tree for the young orphaned family to decorate.

Feeling A bit of gratitude for his kindness, they soon found themselves deciding to find some paper and wrap up the things they had bought over the course of the year, including socks and underwear, and place them under the tree to open as their Christmas gifts. Then, as a gift to each other, they milked the cow and mixed the fresh milk with a little sugar they had saved and boiled the mixture into caramel. Dropping the caramel into little mounds on a cookie sheet, they left them on the kitchen table to cool.

Christmas that year fell on Sunday. They were glad, because going to church would give them some structure on an otherwise insufferable day. They had planned to get up early and do their chores, go to church, return home to open the gifts that they had wrapped for themselves and eat the caramels that they had made.

Christmas morning dawned, and fresh snow had fallen on the orchard during the night, clinging to the apple tree branches and drifting up against the barn. The morning sun was glistening on the snow. Shutting The kitchen door soundly behind them, they trudged through the snow off to sing Christmas carols at church alongside their friends and neighbors.

As they made their way back home they could see that something was different. The door was ajar, and snow had swept through the opening. As they approached the house, they could hear some raucous noise coming through the kitchen door. Pushing it open, they discovered on the floor a bushel basket with a squawking chicken inside with its legs tied together. On the kitchen table was a beef roast, some homemade bread, and a fruitcake.

Then they noticed that two of the caramels were missing and in their place was a handwritten note. Little Edward picked up the note and read: “Merry Christmas. Thanks for the candy. Love, Santa.” Edward had not shed a tear since his mother’s death. Now he sat by the table weeping. “No one will ever again tell me there isn't a Santa,” he said.

Recipe courtesy of Lavern Crump, and originally published in the IFA Cooperator magazine (vol. 86, no. 4) Winter 2020.