The Fussiest Bull Buyer and Cattle Raiser in America 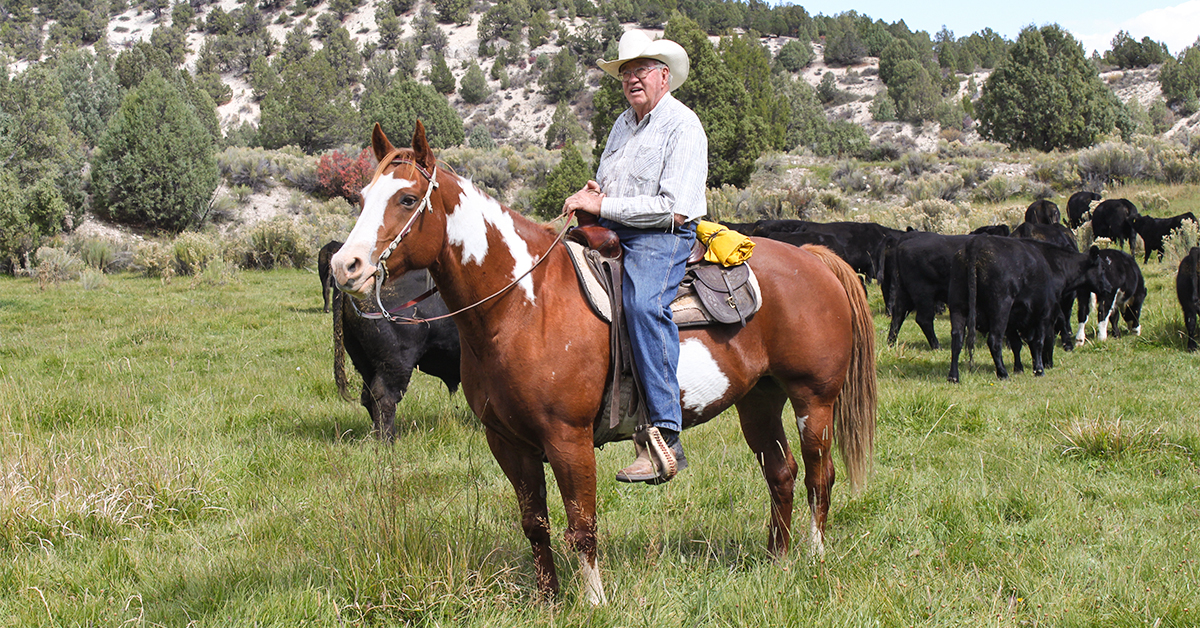 At 84 years old, Gib is a third-generation cattle rancher on his family operation and has always been a loyal IFA cooperative member. He has continued the legacy with his children and grandchildren and they work together, preferably on horseback, to help the operation succeed. 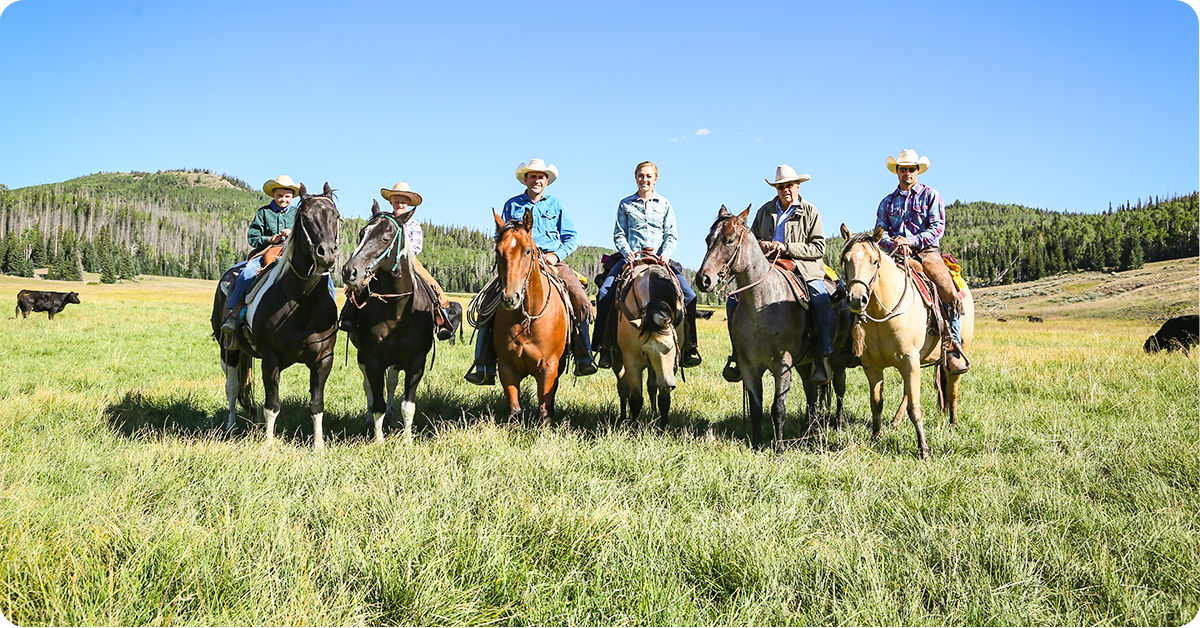 So, what does a fussy cattle buyer look for?

Gib explains, “at our place, we have three breeds, but a lot of people tell me that they can’t tell the difference because they’re so uniform and look so much alike.”

“I like cattle that have a lot of thickness – a good square rump, a level tail setting, a big square top that goes clear up to where their neck joins,” he said.

“We like them to have depth and don’t want them to break behind the shoulders. We like them to be wide based—those hind legs need to have a lot of space between them to show they’ve got a lot of muscling. I like them clean sheathed with lots of muscle and good bone and legs under them.”

“But what’s really important these days are the feet,” he said.

“There’s actually quite an epidemic of awfully bad feet and legs at stock shows in recent years. Some of their hooves are too small and a lot of them curl on the outside. It’s a very bad and serious genetic defect that we really pound on and never tolerate. Our cattle have to walk a long ways to water and in the backcountry, so we’re awful fussy about having good feet and legs on them.”

History of the Ranch

“In February 1856, my great-grandfather, James P. Anderson, along with 13 other men settled the Beaver River Valley and our family has resided here since,” Gib shared on the company’s website.

“My Granddad, James Heber Yardley, (partnered) with his two brothers, and they were always involved in the cattle business.

One brother, Uncle Al, would take a herd of steers and cows and drive them to winter range down on the Arizona Strip. He would take a packhorse and potatoes and salt bacon and live in a tent out there with them all winter.

In the spring of 1908, he (Uncle Al) was coming home from Arizona, and when he got to the northern end of Long Valley, he took the wrong canyon and ended up in the head of Asay Creek. He said this was the most beautiful valley spot he had ever seen in his life. It was a beautiful mountain meadow valley with some big springs and one of the most beautiful streams in the world.

Al found the man who owned the ranch and found out it was for sale, so Al came home and got my granddad, and together they went back and bought it for $5,000. This has forever changed our lives. They then acquired one of the first forest permits on the Dixie National Forest, running 500 head there, which joined the ranch.

It is 75 miles from Asay Creek to Beaver, and they always drove those cattle back and forth on horseback, taking about three-and-a-half days, until the late 1940’s when we started trucking them.”

Gib continues his family's story: "In 1920, Granddad went to a stock show in Kansas and brought the first Hereford cattle to this area."

Through the years, they continued to buy replacement heifers from “the old master Hereford breeder of the United States, Fred DeBerard of Kremmling, CO. We continued to buy registered Herefords, both bulls and heifers, from many other top breeders of the country. We worked hard to create one of the best herds in the west.”

Almost 60 years ago, they started cross-breeding some of the Herefords with Angus, and later bought Simmentals and Maine Anjou, introducing the similar breeds into their program. For 50 years, Gib’s implemented an AI program with the best bulls he can find.

“We are AI more than anybody in Utah and we’re proud of that,” Gib explains.

“Until I was 18 years old, my dad was in partnerships with his brothers, Ike and Roy. We would start hauling hay the 20th of June and hauled hay six days a week until the middle of September. We were cutting, raking, and hauling all at the same time using eight to ten teams of horses.”

“Quite a few years ago, we bought two winter range allotments 40 miles west of Beaver, and we winter most of our older cows out there without feeding hay. They have to calve on their own and do it all. They have to have natural fleshing ability to take it. We have continuously culled cattle that can’t hold their own in these conditions.

The herds graze on Indian rice grass and some native desert browse plants that provide wonderful feed. Since then we have been scattered out for 110 miles between winter and summer ranges. We spend half of our time coming and the other half going.”

Read the full history of the Yardley Cattle Company here

Gil believes raising a strong family is even more important to him than raising strong herds.

“I married a wonderful woman and we’ve had a great family who have worked hard for us,” he said.

“They’re working on the ranch now as partners and doing a great job. Our children love the cattle and our girls can calve heifers as good as any man. For the ones scattered all over the United States, they get homesick when we’re calving and some still come home to help.”

“My wife and I have raised a good family who are also honest, good, hard-working citizens who love and appreciate America. They love the church and are active in it and they strive to live good, clean wholesome lives,” he said.

“I hope they always remember that I’ve worked hard to build a reputation for raising the best cattle in America, that I’ve dealt fairly and squarely and loved them a lot.” 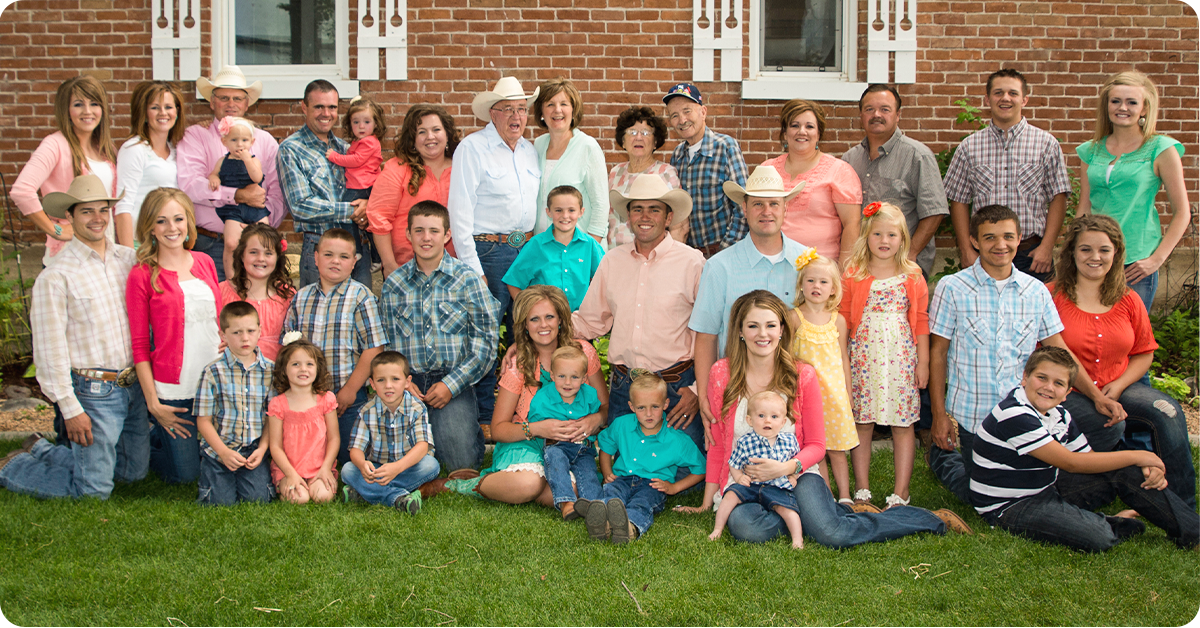 The Yardley Cattle Company hosts an annual, “Focus on the Female” cow sale on the Saturday before Thanksgiving where they offer 150 to 175 bred cows and heifers.

Their nationally recognized bull sale is the second Saturday in March and is the largest in Utah offering more than 200 head.

“For several years I put on sales in Iowa and eastern Nebraska,” he said. “I’ve got those cattle scattered all over the Midwest. Those cows have worked so well for them, now they come to us. We sell to ranchers in 20 to 23 states and sometimes in Canada.”

Fussy About Horses Too

“I’ve always been a great lover of horses,” Gib said. “When I was a boy, we had to do everything on horseback with no cattle trailers or trucks. We had to drive them everywhere and work teams to get our hay up. We used to work about 8 to 10 teams of horses all summer long putting up hay.”

“When I was 13 years old, I got my first black and white paint,” he said. “I was so proud of her and she was such a wonderful horse. I’ve kept that very same family of paints for 70 years now.”

“I’m very fussy about the confirmation of my horses, just like my cows,” he said.

“They must have a gentle disposition and watch a cow. I like them to have a short back, a big hip, a deep body and a little head. That’s the kind of horses we raise and sell. They’ve got great cow sense. They are part of the family and we love them a lot. My family really appreciates them. My children and their spouses are all good horse people.”

“I can remember when it used to be called Utah Poultry and I have a lot of fond memories,” Gib said.

“We’ve dealt with IFA and Utah Poultry all my life. From fertilizers and grains to supplies, we appreciate IFA and all the services they provide for us.”

Read next: Sowing the Seeds of Success on Robert Nielson Ranch

Written by Stacie Duce and originally published in the IFA Cooperator magazine (vol. 83, no. 1) Spring 2017. Photos courtesy of Chris Peterson and the Yardley family.