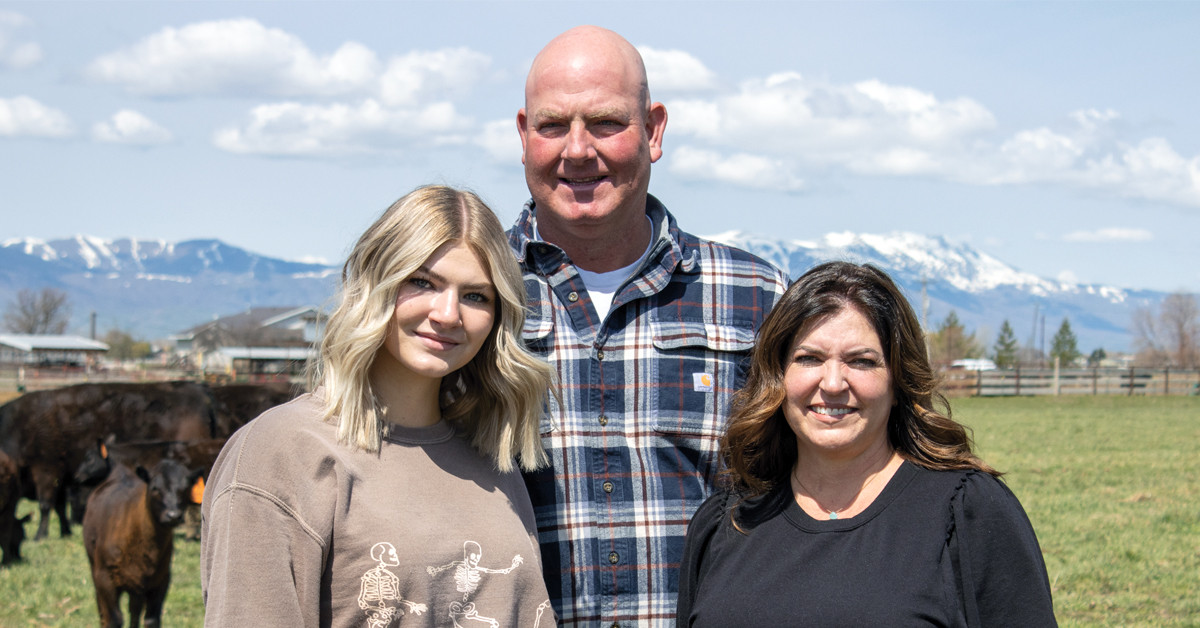 Ten years ago bustling Los Angeles, California was home to John Cannon, his wife Kimberly and their three children but a daydream and a lot of work would soon bring them to the quiet, green hills of Preston, Idaho.

Learning to Love a Lifestyle

John grew up around commercial cattle on long summers spent at his grandfather's Idaho based ranch. There he learned to move pipe, tend cattle and love the ranching lifestyle.

John had always dreamed of owning his own ranch since those fond childhood summers, but it seemed an “impossible feat.” An L.A. accountant by trade, John remembers days driving to work on the freeway thinking about the ranch he might never be able to run.

However, John’s thinking changed one cold day in Preston thanks to a frozen calf, a Nissan Xterra rental car and a little heartfelt conversation with his grandfather.

The Little Calf in the Cold

After receiving a call about a new calf born on his grandfather’s feedlot during one trip to Preston, John and his son found the young animal with frozen ears and its mouth frozen shut. They loaded the shivering calf-sickle into their Nissan Xterra rental car and made their way back to his grandfather’s house.

Once back, John was instructed to leave the calf in the car and keep it running. They let the little rental run all day before John and his grandfather braved the cold once again to try and help the calf get back with its mother.

“The calf wouldn’t suck,” John recalled, “but [grandpa] kind of broke down about how much he loved cattle and that it is something I should pursue.”

Eventually the young calf did recover but that night and heartfelt conversation was a turning point for John who soon purchased a small Idaho ranch of his own.

From the Ground Up

80 acres and 10 registered black angus cows were the seeds John would use to bring his life-long dream to fruition but not without an uphill battle.

“Sight unseen, I bought this place,” says John looking out at the now cattle filled pens. “When I showed up my heart just sunk and I was like, what am I doing?” Purchasing the small plot of land with a single run-down barn, a cluster of worn out pens and a quaint farmhouse would soon prove to be a life-altering decision.

John didn’t intend on moving his family to the newly acquired ranch initially, or at least not in the near future. Instead, he was racking up frequent-flier miles between Preston and L.A. especially during calving season.

“Things were good,” says John until a large group of calves were all born on Christmas Day. One calf in particular was “a little bigger than expected” and its mother, one of John’s original 10 cows, became paralyzed.

The next day John was at the ranch tending to the new calves and the struggling cow. With considerable effort spent rolling the immobilized animal back and forth onto both hips and administering steroids twice a day, the cow recovered and John returned to his normal back and forth routine.

However, this was just the start of complications that would require John’s constant care and oversight. Soon, he was spending a lot more time in Idaho than even he thought.

“My kids were like ‘you’re here half the year’ and I had no idea,” says John. Not long after the family was driving into Preston for shakes one particular night and the kids suggested “maybe we should just move here.”

The next summer, just one week before school started, the family packed up and traded crowded L.A. streets for a full-time life on the ranch.

Managing a ranch from 800 miles away was not the only challenge John faced in growing his operation. There was also a steep learning curve associated with the purebred side of things that John still had to navigate.

John’s commercial background would serve useful but not entirely consistent with his needs as a now purebred breeder, especially when it came to nutrition and mineral packages.

“In the commercial world you just toss a block of salt out,” says John, indicating that this was exactly how he had been supplementing his herd’s nutritional needs.

Then one day a friend of John’s, a fellow purebred black angus rancher, stopped by and asked where his mineral package was. Confused, John indicated the mineral blocks in the pens and according to him, the rancher simply replied, “that block of salt is not going to work.”

This conversation was an eye opener to John about just how much he had to learn to raise purebred cattle. Particularly, when it came to nutrition.

John learned about IFA’s feed mill and mineral mixes from his neighbor, Rex Larsen, who happened to be an IFA Feed and Nutrition Salesman.

“We started with the bare minimum of the custom mix,” says John. Then over time, that minimum mix became a little more tailored to the needs of Cannon Angus Ranch and the nutritional problems ailing John’s cattle.

“Over time we just kind of evolved our mineral package into a very specific mineral package for Cannon Angus,” says John, “it treats everything we’ve got issues with.” John went on to indicate that hoof rot, once a problem in his herd, was not prevalent in the animals last year; a win he attributes to his specialized mineral package.

IFA nutritionist Dennis Christensen has worked closely with John for over two years, forming a relationship with him and getting to know his goals as well as his cattle. “I want someone who’s interested in what I’m doing,” says John, noting that an answer to his questions or a solution to a problem is a simple phone call away. 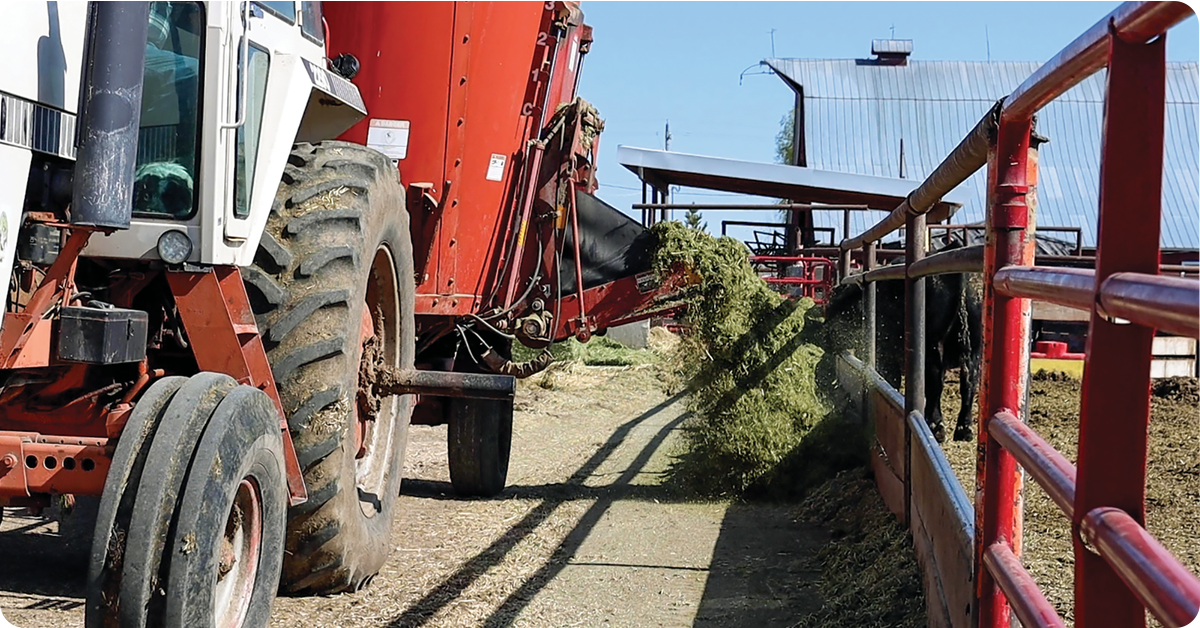 To reduce his feed costs, John has also expanded his operation by purchasing farm ground to raise quality hay for his rations.

Like with custom mineral packages, John has learned that a quality hay crop requires more than just the minimum for the best results, which is why John soil tests and fertilizes his fields every year.

“It doesn’t make sense to spend all summer farming something that’s not growing to its maximum potential,” says John. He works closely with Robert Rhoten, a Certified Crop Advisor and IFA Agronomy specialist, to ensure his crops are growing to their highest potential.

By testing the soil in each field, Robert can identify key nutrients that might be missing. He then works with John to recommend the best fertilizers and fertilization rates.

John says that taking the time to make sure the fields are performing helps ensure he has what he needs to get his cattle through the winter.

Quality feed and custom mineral packages have been instrumental in helping John’s animals achieve their genetic potential, something he is passionate about. Navigating genetics is vital to success in a purebred business; luckily, this is an area where John excels.

John says he “can’t even quantify” the amount of time he spends each day researching cattle genetics. He constantly checks the Expected Progeny Differences of registered bulls and cattle with a scrutinizing eye, imagining potential crosses and phenotypical results within his herd.

According to John, it has taken the ranch nine years of careful breeding and selection to get something they “really like and really like to look at.” Perfection is not the goal to John. He simply wants “to raise the best bull that gives you the best calf when it hits the ground all the way until it’s hanging in the meat plant.”

Overall, the goal is raising functional animals that work for the commercial cattlemen who bring Cannon Angus genetics to their herd. “We’re not trying to hit a home run,” says John, “we’re just hitting base hits.” 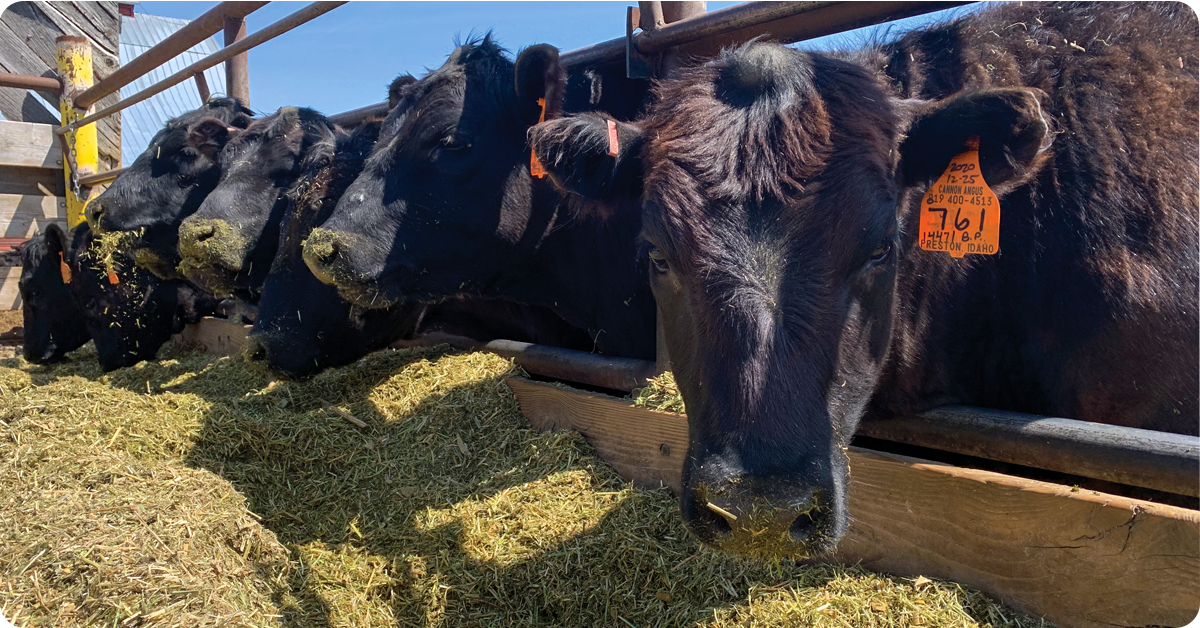 Careful genetic selection and helping John’s animals achieve their genetic potential has carried the ranch to several notable wins, including a successful annual spring bull sale--now in its fourth year--as well as repeat customers who have developed trust in the Cannon Angus brand.

As the Cannon Angus Ranch Bull Sale grows each year, John and his family are grateful for the support they’ve seen from IFA, especially the Preston IFA Country Store. “For the bull sale, they’re here, and they’re just always helping,” says John’s youngest daughter JoJo, “I know they’re supportive of my dad and everything he does.”

IFA is proud to be a part of Cannon Angus Ranch’s growing legacy. Our feed, farm supply and agronomy divisions are excited to continue helping John and his family nurture that legacy.

“We’re just trying to build a brand,” says John. “We’re just going to keep hitting some base hits and see where we go.”

IFA is proud to help build the Cannon Angus brand and provide the resources needed by purebred producers like John. Our nutrition and agronomy experts take a genuine interest in providing the services and help Intermountain growers need to succeed.

Learn more about how your IFA Co-op helps Intermountain producers and get in contact with an IFA nutrition and agronomy expert.

Read next: Sowing the Seeds of Success on Robert Nielson Ranch

Written by Mikyla Bagley and originally published in the IFA Cooperator magazine (vol. 88, no. 3) Fall 2022.